Radiative Forcing from a change in atmospheric CO2 concentration

However, radiative forcing is customarily defined at TOA, not at the surface. That is, it's specified in terms of an equivalent change in solar radiation. The effect of GHGs on radiation balance at the surface is similar, but not identical, to their effect at TOA.

The only way that energy leaves the Earth at TOA is by radiation, but at the Earth's surface the energy fluxes are much more complicated, including important mechanisms like convection and evaporative cooling. Warming the Earth causes its rate of cooling to increase by all of those mechanisms, making them negative feedbacks. Those negative feedbacks limit the temperature increase which results from an increase in any forcing. 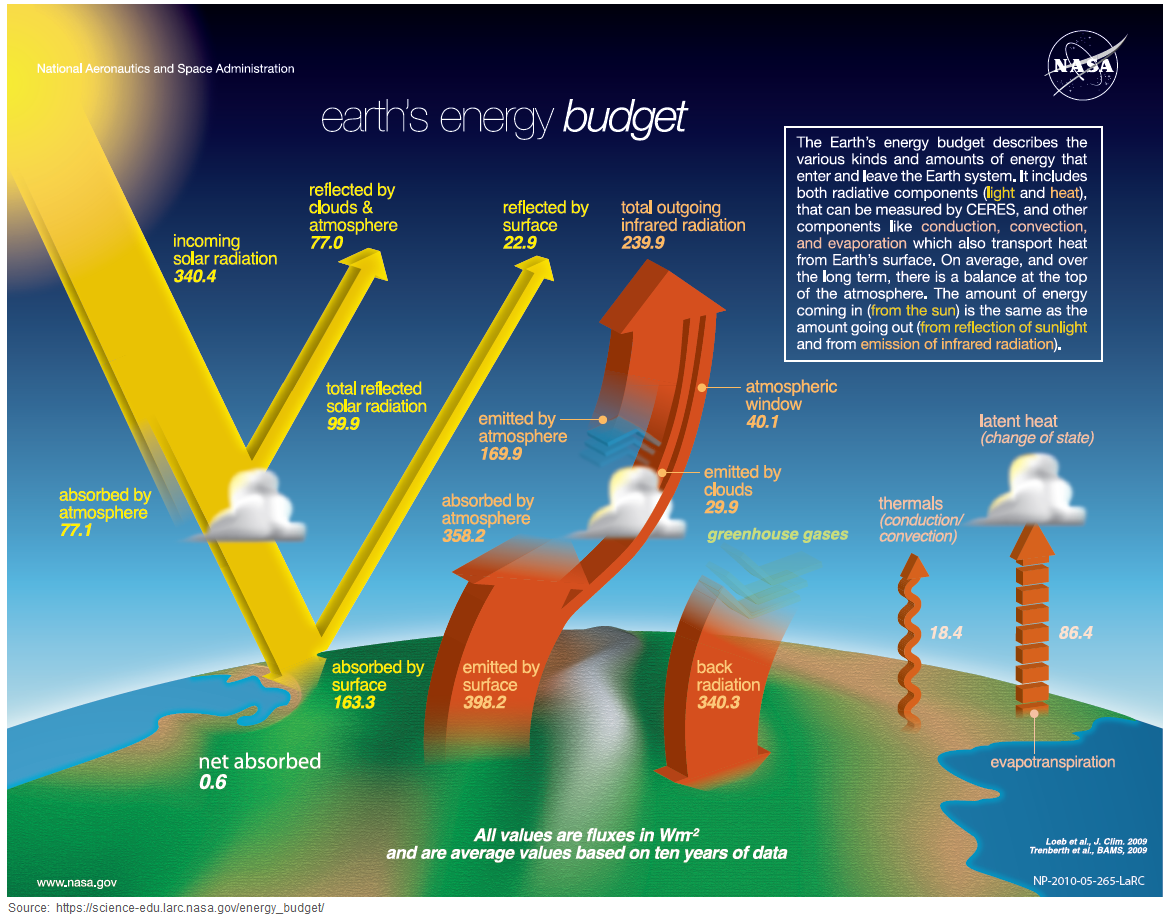 The diagram was discussed on WUWT, here:
https://wattsupwiththat.wordpress.com/2014/01/17/nasa-revises-earths-radiation-budget-diminishing-some-of-trenberths-claims-in-the-process/

It's one-fourth because the 1361.6 W/m² figure is solar radiation intensity at TOA, where the Earth directly faces the Sun, and the 340.4 figure is averaged over the entire globe, including the back side. (The surface area of a sphere is exactly four times the area of a circle of the same radius.)

The “radiative imbalance” (a/k/a “Earth's energy imbalance”) represents warming “in the pipe,” but not yet realized.

It is poorly constrained, and not directly measurable. I’ve also seen estimates of 0.7 or 0.8 W/m². Calculation from realistic estimates of other common climate parameters yields a radiative imbalance estimate of about 0.3 W/m².

3. Downwelling “back radiation” at the surface, from GHGs in the atmosphere, is estimated as averaging 340.3 W/m². That's about the same as the solar irradiance at TOA, but ≈29% greater than the average amount of solar radiation which makes it to the surface. ↑

4. About 22.6% (77 W/m²) of the incoming solar radiation is reflected back into space, without either reaching the surface or being absorbed. ↑

Thus, an increase of 1 W/m² in LW IR at the surface from GHGs in the atmosphere has an effect on surface temperatures which is similar to a = 1.29 W/m² increase in average solar irradiance at TOA (like a 5.17 W/m² increase in the Solar Constant).

That 1.29:1 ratio is approximate, because the effect of sunlight at the surface is not identical to the effect of downwelling LW IR from atmospheric CO2. On one hand, there's some overlap between the spectrums of CO2 and water vapor, which reduces the warming effect from CO2, especially in the humid tropics. On the other hand, an estimated 22.9 W/m² (6.7%) of sunlight is reflected from the surface back into space, which does not happen for LW IR. If that 6.7% were included in the calculation above, it would make an an increase of 1 W/m² in downwelling LW IR at the surface similar in effect to a = 1.42 W/m² (rather than 1.29 W/m²) increase in average solar irradiance at TOA, like a 5.66 W/m² increase in the Solar Constant.

That figure is very close to Halpern's “4.35”, and closer to Happer's “3.8” than to Myhre's “5.35,” but the uncertainty interval is wide enough to encompass all three estimates. It does preclude the SAR's “6.3” figure.

To get a feel for what such RF values imply for temperatures, consider that it is calculated that a uniform global temperature increase of 1°C would increase radiant heat loss from the surface of the Earth by about 1.4% (variously estimated to be 3.1 to 3.7 W/m², or 3.1 to 3.3 W/m² in the CMIP5 models — it's complicated). That suggests that a 3 W/m² forcing increase should result in a bit less than 1°C of average eventual warming, and that 0.53 W/m² over 1.5 decades (per Kramer et al) should yield a warming trend of about +0.11°C/decade, which is about right.

However, Koll & Cronin (2018) report that, in practice, with feedbacks, the relation under clear sky conditions is (surprisingly!) approximately linear, and only about (±10%). That means a 3 W/m² forcing increase (from a doubling of atmospheric CO2 concentration) should result in about = just under 1.4°C of average eventual surface warming. (That is an estimate of ECS climate sensitivity.) ↑

• For a deeper dive into “climate sensitivity” (the quantified warming effect of CO2) see:
https://sealevel.info/sensitivity.html