Christopher Booker thinks NOAA is distorting global land temperature data to inflate reported global warming, and fan the flames of climate alarmism, and he's written a couple of articles about it.

Dr. Kevin Cowtan contends Booker is wrong, and he created a YouTube video about it. Dr. Cowtan trusts that NOAA's adjustments are justified and correct, and he also says they are too minor to be questionable. “Why would they do that?” he asks at the end of his video, meaning why would anyone commit fraud for an inconsequential difference in the result?

I don't know with certainty whether or not NOAA's adjustments are all justified and correct, but I found Dr. Cowtan's argument unpersuasive, for two reasons.

The first reason is that he's assuming that fraudulent intent is the only possible explanation for biased results, but it isn't. If the results are biased to exaggerate warming, it could also be due to confirmation bias or other error, even by people with the best of intentions.

The Telegraph: 24 January, 2015
Climategate, the sequel: How we are STILL being tricked with flawed data on global warming
“Something very odd has been going on with the temperature data relied on by the world's scientists,” writes Christopher Booker

The Telegraph: 7 February, 2015
The fiddling with temperature data is the biggest science scandal ever
“New data shows that the vanishing of polar ice is not the result of runaway global warming,” writes Christopher Booker

NOAA Paraguay data: https://www.youtube.com/watch?v=qRFz8merXEA
“A quick response to an article by Christopher Booker in the Telegraph.” 26 January, 2015

Dr. Cowtan briefly had the pre-release GHCN graphing and analysis tool which he used in the video on-line at http://www.ysbl.york.ac.uk/~cowtan/applets/demo/demo9.html, but he took that page down before I got a chance to try to download any data from it.

[2015-05-27 - It appears that Dr. Cowtan has released his tool, here: http://tools.ceit.uq.edu.au/temperature/index.html, with the in-your-face offensive name, “DENIAL101x temperature tool,” and usage instructions on the SkS blog.]

This is a spreadsheet with endpoint data digitized from Dr. Cowtan's graph:

This is a spreadsheet with decadal data digitized from Dr. Cowtan's graph: 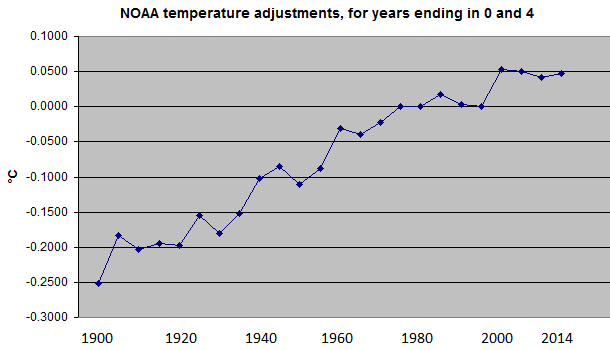 There's a discussion of all this on the SkS blog, here.

One fact that seems to support Mr. Booker's suspicion that NOAA is up to no good is their efforts to prevent the archiving of their data and documents:
https://stevengoddard.wordpress.com/2012/06/11/giss-blocking-access-to-archived-data-and-hansens-writings/#comment-487575 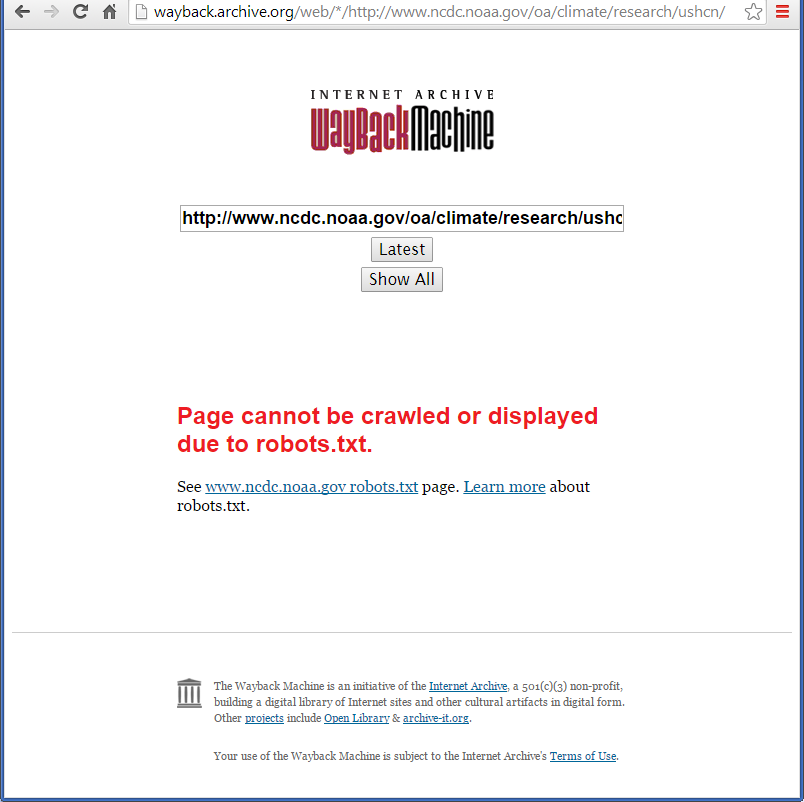