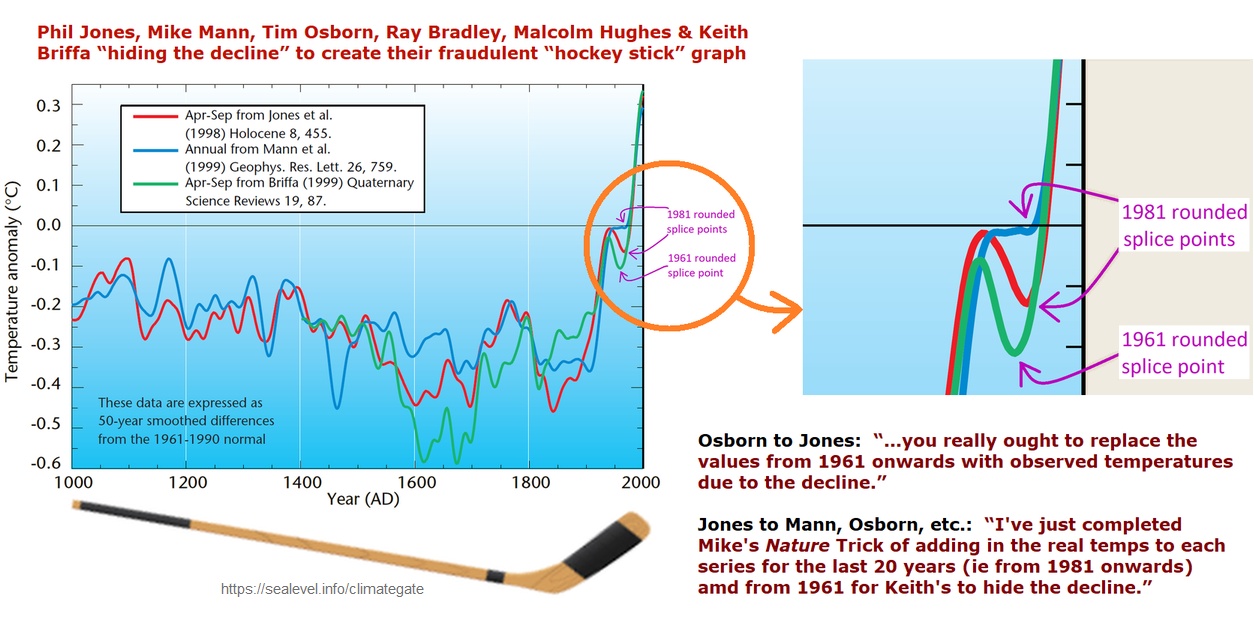 (click here to enlarge illustration, or here for more details about it)

“Climategate” was the worst scientific scandal since Piltdown Man. It was a pair of “document dumps” in 2009 and 2011, by a still-anonymous whistle-blower calling himself or herself “FOIA.” He released thousands of climate-related emails, documents & computer code, which revealed that leading climate scientists had been manipulating & withholding data, hiding evidence, flouting FoIA laws to illegally evade legitimate requests for data needed to replicate scientific studies, and blackballing skeptics, to promote the CAGW scare.

The Institute of Physics concluded that:

"The CRU e-mails as published on the internet provide prima facie evidence of determined and co-ordinated refusals to comply with honourable scientific traditions and freedom of information law. The principle that scientists should be willing to expose their ideas and results to independent testing and replication by others, which requires the open exchange of data, procedures and materials, is vital. The lack of compliance has been confirmed by the findings of the Information Commissioner. This extends well beyond the CRU itself most of the e-mails were exchanged with researchers in a number of other international institutions who are also involved in the formulation of the IPCC's conclusions on climate change."

Bishop Hill's blog has a brief but excellent summary (or here) of the most incriminating Climategate emails, and Dr. John Costella did a far more extensive analysis.

Two of the most infamous email conversations were:

2. The Phil Jones / Michael Mann / Tim Osborn / Ray Bradley / Malcolm Hughes / Keith Briffa email conversation about using “Mike's Nature Trick” to “hide the decline” in proxy-derived temp­er­a­ture estimates, which, by their inconsistency with measured temp­er­a­ture data, falsified the proxy methods (which, as Dr. David Legates and then Prof. Richard Muller both explained in 2004, were already dubious). ↑

In this video, Prof. Muller, a longtime climate alarmist who now describes himself as a lukewarmist, did a very good job of explaining Michael Mann's “Nature trick” to “hide the decline” in proxy-derived temperature estimates: 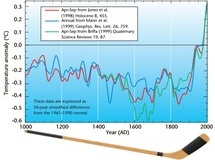 In a pair of papers in 1998 (in Nature) and 1999 (in GRL), Mann, Bradley & Hughes challenged that orthodoxy with a new temperature reconstruction, a/k/a their heavily-hyped “hockey stick.” It erased the MWP, and mostly erased the LIA, to create a straight “hockey stick handle” from 1000 AD to 1900 AD, which was followed by a sharp “hockey stick blade” of rising temp­er­a­tures in the 20th century.

A variant of the hockey stick graph from that paper, created by Phil Jones, also appeared on the cover of the World Meteorological Organization's alarming 1999 Climate Statement. In that graph, at the suggestion of Tim Osborn, Phil Jones infamously used “Mike's Nature Trick” (“Mike” was Michael Mann), of 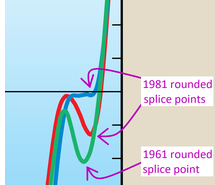 splicing measured temperature data into a graph of temperature “proxies,” to “hide the decline” in climate proxies, which would have spoiled the “hockey stick shape” of the graph, discredited their tree ring proxy-based temperature reconstruction meth­o­dol­ogy, and undermined the narrative of alarm­ing global warming.

Jones used identical colors for the proxy recon­struc­tion data and instrument data, and rounded the three splice points to hide the splices. Despite the graph labels which claimed that the three traces were proxies, from 1981 on all three traces were actually real (instrument) temperature data (and the green trace was real temperature data from 1961 on). Yet the three traces of the same instrument data were slightly different, because, to hide the splice points, Jones had to bend the traces a bit, to make them line up with the three proxy traces.

The Climategate whistleblower didn't only release emails. He or she also released a lot of computer source code, and it is just as damning as the emails. Here's a sample, and analyses by Eric Raymond and Robert Greiner.

The full collection of Climategate files is available here.

The press coverage of this scandal was predictably miserable, but Dr. Judith Curry has an excellent, balanced discussion of the “hide the decline” aspect of the scandal, here.

The most comprehensive report on the Climategate scandal (or here) was produced by the U.S. Senate Environment and Public Works (“EPW”) Committee minority staff.

For the sake of balance, here's a 160-page report, commissioned and paid for by the University of East Anglia (UEA), purporting to exonerate the UEA CRU scientists of wrongdoing. It was the work of a five-man team led by Sir Muir Russell, who whitewashed the scandal.[alt] That very weak report raised eyebrows even at the left-wing Guardian.

The faculty at UEA was almost, but not quite, uniformly in the alarmist camp. Two notable exceptions were Drs. Paul Dennis and Alan Kendall. Dr. Kendall was publically "outed" as a skeptic of climate alarmism in 2011, and retired a few years later. He has recently written several fascinating articles recounting the scandal, from someone who watched it unfold from within the halls of the University: [Part 1] [Part 2] [Part 3]

The whistleblower's “readme” manifesto explains why it is important that scientific malpractice be exposed. He (or she) was motivated by his understanding of the tragic cost of climate disinformation. He wrote: ↑

'Over 2.5 billion people live on less than $2 a day.'
'Every day nearly 16.000 children die from hunger and related causes.'
'One dollar can save a life' -- the opposite must also be true.
'Poverty is a death sentence.'
'Nations must invest $37 trillion in energy technologies by 2030 to stabilize greenhouse gas emissions at sustainable levels.'
Today's decisions should be based on all the information we can get, not on hiding the decline.

The Climategate scandal was one of the things that first drew my attention to this field.

Journalist James Delingpole has followed the Climategate scandal closely, from the beginning, and he is very discouraged.

An abbreviated version of this page is also available as a Quora Answer, here.

(This page is mostly copied from
https://sealevel.info/resources.html#climategate)