Last November there was a world-wide outcry when a trove of emails were released suggesting some of the world's leading climate scientists engaged in professional misconduct, data manipulation and jiggering of both the scientific literature and climatic data to paint what scientist Keith Briffa called "a nice, tidy story" of climate history. The scandal became known as Climategate. 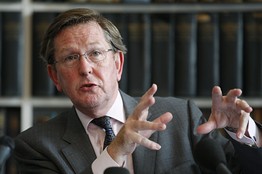 Mr. Russell took pains to present his committee, which consisted of four other academics, as independent. He told the Times of London that "Given the nature of the allegations it is right that someone who has no links to either the university or the climate science community looks at the evidence and makes recommendations based on what they find."

No links? One of the panel's four members, Prof. Geoffrey Boulton, was on the faculty of East Anglia's School of Environmental Sciences for 18 years. At the beginning of his tenure, the Climatic Research Unit (CRU)—the source of the Climategate emails—was established in Mr. Boulton's school at East Anglia. Last December, Mr. Boulton signed a petition declaring that the scientists who established the global climate records at East Anglia "adhere to the highest levels of professional integrity."

This purportedly independent review comes on the heels of two others—one by the University of East Anglia itself and the other by Penn State University, both completed in the spring, concerning its own employee, Prof. Michael Mann. Mr. Mann was one of the Climategate principals who proposed a plan, which was clearly laid out in emails whose veracity Mr. Mann has not challenged, to destroy a scientific journal that dared to publish three papers with which he and his East Anglia friends disagreed. These two reviews also saw no evil. For example, Penn State "determined that Dr. Michael E. Mann did not engage in, nor did he participate in, directly or indirectly, any actions that seriously deviated from accepted practices within the academic community."

Readers of both earlier reports need to know that both institutions receive tens of millions in federal global warming research funding (which can be confirmed by perusing the grant histories of Messrs. Jones or Mann, compiled from public sources, that are available online at freerepublic.com[1]). Any admission of substantial scientific misbehavior would likely result in a significant loss of funding.

It's impossible to find anything wrong if you really aren't looking. In a famous email of May 29, 2008, Phil Jones, director of East Anglias CRU, wrote to Mr. Mann, under the subject line "IPCC & FOI," "Can you delete any emails you may have had with Keith [Briffa] re AR4 [the Intergovernmental Panel on Climate Change (IPCC) report]? Keith will do likewise can you also email Gene [Wahl, an employee of the U.S. Department of Commerce] to do the same ... We will be getting Caspar [Amman, of the U.S. National Center for Atmospheric Research] to do likewise."

Mr. Jones emailed later that he had "deleted loads of emails" so that anyone who might bring a Freedom of Information Act request would get very little. According to New Scientist writer Fred Pearce, "Russell and his team never asked Jones or his colleagues whether they had actually done this."

The Russell report states that "On the allegation of withholding temperature data, we find that the CRU was not in a position to withhold access to such data. Really? Heres what CRU director Jones wrote to Australian scientist Warrick Hughes in February 2005: "We have 25 years or so invested in the work. Why should I make the data available to you, when your aim is to try and find something wrong with it[?]"

Then there's the problem of interference with peer review in the scientific literature. Here too Mr. Russell could find no wrong: "On the allegations that there was subversion of the peer review or editorial process, we find no evidence to substantiate this."

Really? Mr. Mann claims that temperatures roughly 800 years ago, in what has been referred to as the Medieval Warm Period, were not as warm as those measured recently. This is important because if modern temperatures are not unusual, it casts doubt on the fear that global warming is a serious threat. In 2003, Willie Soon of the Smithsonian Institution and Sallie Baliunas of Harvard published a paper in the journal Climate Research that took exception to Mr. Mann's work, work which also was at variance with a large number of independent studies of paleoclimate. So it would seem the Soon-Baliunas paper was just part of the normal to-and-fro of science.

But Mr. Jones wrote Mr. Mann on March 11, 2003, that "I'll be emailing the journal to tell them I'm having nothing more to do with it until they rid themselves of this troublesome editor," Chris de Freitas of the University of Auckland. Mr. Mann responded to Mr. Jones on the same day: "I think we should stop considering 'Climate Research' as a legitimate peer-reviewed journal. Perhaps we should encourage our colleagues . . . to no longer submit to, or cite papers in, this journal. We would also need to consider what we tell or request our more reasonable colleagues who currently sit on the editorial board."

Mr. Mann ultimately wrote to Mr. Jones on July 11, 2003, that "I think the community should . . . terminate its involvement with this journal at all levels . . . and leave it to wither away into oblivion and disrepute."

Climate Research and several other journals have stopped accepting anything that substantially challenges the received wisdom on global warming perpetuated by the CRU. I have had four perfectly good manuscripts rejected out of hand since the CRU shenanigans, and I'm hardly the only one. Roy Spencer of the University of Alabama, Huntsville, has noted that it's becoming nearly impossible to publish anything on global warming that's nonalarmist in peer-reviewed journals.

Of course, Mr. Russell didn't look to see if the ugly pressure tactics discussed in the Climategate emails had any cons equences. That's because they only interviewed CRU people, not the people whom they had trashed.

Mr. Michaels, a professor of environmental sciences at the University of Virginia from 1980-2007, is now a senior fellow at the Cato Institute.

This copy is for your personal, non-commercial use only. Distribution and use of this material are governed by our Subscriber Agreement and by copyright law. For non-personal use or to order multiple copies, please contact Dow Jones Reprints at 1-800-843-0008 or visit www.djreprints.com