Unfortunately, The Verge Science is censoring comments on YouTube, to prevent criticism. They shadowbanned (hid) my comments critiquing Cory Zapatka's conversation with Dr. Andrea Dutton. Since Cory has not responded to my enquiries, I posted my comments here, instead.

A critique, by Dave Burton, of:
Sea level rise is so much more than melting ice
by Cory Zapatka of The Verge, and Dr. Andrea Dutton
https://youtube.com/watch?v=SA5zh3yG_-0

@CoryZapatka, you phoned the wrong "expert." Andrea Dutton is a friend of Michael "the data molester" Mann. She's a scientist, but she's also an activist, with a history of misrepresenting the science. She did not give you balanced information.

The truth is that manmade climate change has had no detectable net effect on sea-level trends. That is a basic, measured fact, which she should have told you.

The rate of sea-level rise has been measured for over a century at many locations, and for as long as two centuries, at some. Those measurements show that sea-level trends have not detectably increased (i.e., sea-level rise has not accelerated) since the 1920s.

Here's an interactive version of the same graph:


On the right-hand side you can see the linear and quadratic regression calculation results, for the last ninety years. The "acceleration" (increase in rate) was –0.0026 ±0.0164 mm/yr². (Notice the minus sign, and notice the fact that the uncertainty range is larger than the central value.)

If that's not obvious to you from the graph, here's a little primer that should help:

At :57 Dutton claimed that "as you warm up the planet, we're going to melt the ice that's sitting on land: the large ice sheets as well as mountain glaciers."

That's very deceptive. It is true that warming temperatures can cause mountain glaciers to melt, in some places. But there are only two large ice sheets on the Earth, Greenland and Antarctica, and she used the plural form ("ice sheets"), so she was apparently talking about both of them -- so she was talking nonsense, because Antarctica's ice is not melting -- not significantly, anyhow.

Ice only melts if its temperature rises above the freezing point, and Antarctica averages more than 40° below zero. A few degrees of warming obviously cannot melt it.

The ice mass trends in Antarctica are so close to perfectly balanced that scientists cannot agree on whether it is gaining or losing ice. Some studies find it gaining a bit, others find it losing a bit, but they all agree that the rate, whether up or down, is so tiny that it could contribute at most about three inches of sea-level change per century, which is obviously negligible.

Warmer temperatures do not necessarily melt ice sheets and raise sea-level. Where ice sheets or glaciers are near 0°C, or the ice is grounded below the ocean's waterline, warmer temperatures can, indeed, accelerate melting. But at more than 40° below zero, the bulk of the Antarctic ice sheet is in no danger of melting from a few degrees of warming. Only in southern Greenland, on the Antarctic Peninsula, and where the ice sheets are grounded below sea-level and in contact with the ocean, is significant melting even plausible.

Greenland ice melt is less ridiculous to consider. It is also very cold, but not as cold as Antarctica, and Greenland does experience a small amount of net ice loss, most years (though not at all in either of the two most recent glaciological years).

But it is very slow. Assuming that the ice loss resumes, and proceeds
at its long-term average rate, then to melt the Greenland Ice Sheet
entirely would take 90 to 150...
‍‍‍‍‍‍ ‍‍
...you thought I was going to say "years," didn't you?

That's right: the rate of ice melt is so slow that it would take at least ninety centuries — compared to an anthropogenic CO2 pulse which will last a few centuries at most.

What's more, we know that southern Greenland, which is the only place in Greenland where significant melting is plausible, was significantly warmer than it now is, during the Medieval Warm Period, circa 850 to 1300 A.D. -- without causing enough sea-level rise to be notable elsewhere in the world. We know it was warmer then at that time, because Norse settlers there buried their dead in what is now permafrost, and they successfully grew barley, though it's too cold there to grow barley to maturity, now.

That is compelling evidence that we need not worry about ice sheets melting and causing major sea-level rise.

-- you made a mistake. The fact that the ocean is not flat is not any part of the reason that NYC sees about twice the global average rate of sea-level rise (not just 1.5×, BTW). The real reason is that the land is sinking. At NYC, as is the case in many other places, vertical land motion has as large an effect on local sea-level trends as does global sea-level rise.

-- you said that "melting glaciers" are slowing the Gulf Stream. But that is just hypothetical. Listen carefully at 3:09 and hear that Dutton says "we expect the rate of water moving north to slow down." She "expects" it (I don't), but it hasn't actually happened, so it obviously has not actually affected NYC's sea-level. The best evidence is that the Gulf Stream / AMOC are not actually slowing:

-- you finally got to the real reason that sea-level rises at NYC at twice the global average rate (though still only about 1 foot per century): the land is sinking. But it's not just because of post-glacial forebulge sinking. The NYC tide gauge is at a place called The Battery, which is on the edge of Battery Park, which is built on top of fill dirt. Other nearby sites measure less sea-level rise than that site. So it is likely that the fill dirt, and/or the weight of the city's buildings, are causing the ground to slowly sink.

-- you botched the explanation for rapid sea-level rise at the Mississippi Delta. The problem is not that the Mississippi River "is" dumping so much sediment there, the problem is that it used to dump so much sediment there. For thousands of years, periodic flood events carried enormous amounts of sediment to the Delta, and that caused the land to start sinking. It is still sinking but, because of dams on the river, those flood events rarely happen, now. So there's little additional sediment being deposited to offset the effects of sinking land.

The current rate of sea-level rise is so tiny that in many places it is dwarfed by vertical land motion, and other local factors, like erosion and sedimentation. So global sea-level rise is really almost inconsequential. But activists like Dr. Dutton predict that drastically accelerated sea-level rise will happen because of climate change, and that it will be the worst of the negative effect of that climate change.

That's "junk science." The only way to reach that conclusion is by ignoring the most important effects.

Dr. Dutton mentioned only one factor that affects ice sheet and glacier mass balance: ice melting. But there are actually four factors which affect it, and melting is not even the most important of them. They are: snowfall accumulation, sublimation, melting, and glacier calving. In both Greenland and Antarctica, snowfall is by far the most important of those four factors. In fact, in Antarctica, snowfall accumulation is approximately equal to the sum of the other three. Yet Dr. Dutton didn't even mention snowfall.

That's probably because a discussion of snowfall would detract from the activist narrative of catastrophic effects from global warming, since it offsets the effects on sea-level of melting.

The magnitude and importance of snowfall on ice sheet mass balance is illustrated by the story of Glacier Girl. She's a Lockheed P-38 Lightning which was extracted in pieces from beneath 268 feet of accumulated ice and snow (mostly ice), fifty years after she landed on the Greenland Ice Sheet.

That is an astonishing number, more than 5 feet of ice per year, which is equivalent to more than seventy feet of annual snowfall! That snow represents evaporated water, mostly removed from the Arctic and North Atlantic Oceans, which fell as ocean-effect snow on the Greenland Ice Sheet, and accumulated there. 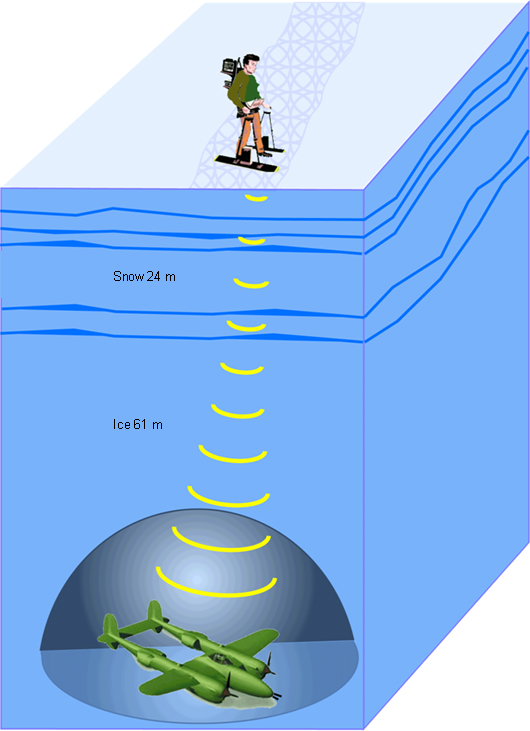 The story of Glacier Girl is fascinating. You can read more about it here:
Glacier Girl: The Back Story


and here:
The Lost Squadron (Recovery of a P-38 from beneath a Greenland ice cap)

So, what happens to snowfall in a warming climate?

It increases, for two reasons.

One reason is that warmer air holds more moisture. Very roughly, a single degree Celsius of warming increases the amount of moisture the air can carry by about six to seven percent. So, as long as the temperature stays below freezing, the warmer it gets, the greater the snowfall. So when temperatures are very low there’s little snowfall, because the air holds very little moisture.


That’s why the largest snowstorms usually occur when temperatures
are only slightly below freezing.

Another reason is that a warmer climate should reduce sea-ice extent, increasing evaporation from the Arctic, North Atlantic, North Pacific, and Southern Oceans, and increasing Lake/Ocean-Effect Snowfall (LOES) downwind. When that snow falls on the ice sheets, it adds to ice mass accumulation and subtracts from sea-level:

We can, however, draw upon the historical record, to gain insight. At the best tectonically stable locations, sea-level has been rising at about 1½ mm/year (6 inches per century) since the 1920s or before, with no sign of significant acceleration due to rising CO2 levels.

In fact, even though GHG emissions and levels have been continuously rising for over two-thirds of a century, none of the predicted major harms have come to pass. All of the major effects, so far, have been positive.

The best evidence is that anthropogenic global warming is modest and benign, and rising CO2 levels are beneficial, rather than harmful, for both mankind and most natural ecosystems. Learn more here: