What do you know or think is known about the controversies around the nature and possible causes of earth's ever-changing climate? Have you heard that it is “settled science?”

MUCH of the public's information comes from reports from the UN Inter­gov­ern­men­tal Panel on Climate Change (IPCC), and their reports have been deeply criticized by other serious scientists. A major organization of climate scientists which assesses the foundational data produced by IPCC is The Global Warming Policy Foundation. William Happer, ICON's next speaker, is on their Academic Advisory Council.

This Advisory Council has made a series of specific recommendations to improve the quality of data issued by the IPCC. Come to Dr Happer's talk to hear more on this, and see the following reference to become more familiar with some of the issues:
“What is Wrong with IPCC? Proposals for a Radical Reform,” by Ross McKitrick.

Tickets to the Happer event can be purchased through the ICON website on-line for $10:
http://www.iconlectureseries.com

Get your tickets NOW, and have a wonderful end of the Summer! 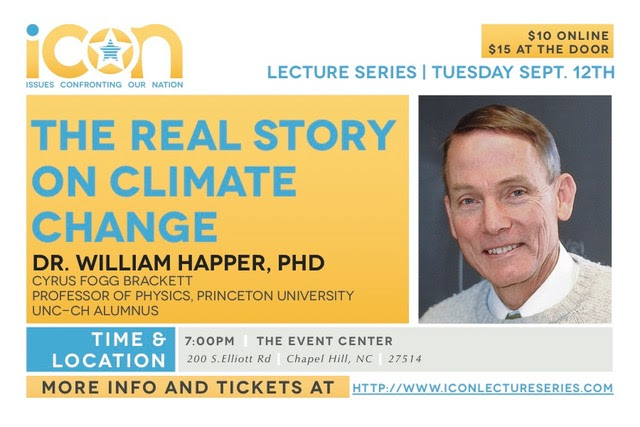 Biographical info:
Prof. Will Happer is the Cyrus Fogg Bracket Professor of Physics Emeritus at Princeton University, and a Board Member of the CO2 Coalition. He is a leading atmospheric physicist, and one of the world's top experts on the absorption and emission of radiation by carbon dioxide. He was chair of the Princeton University Research Board for twenty years. He is the inventor of the sodium laser guide-star system, which is now used by most large optical telescopes to correct atmospheric distortions, and which has been called “perhaps the most spectacular, revolutionary advance in ground-based astronomy since the invention of photography.” He was a pioneer in the field of optically polarized atoms. At Columbia University he was director of the Columbia Radiation Laboratory. Over his career, Dr. Happer has served as a scientific consultant to many companies, charitable organizations, and government agencies. He is an entrepreneur, who founded a successful startup company called Magnetic Imaging Technologies, Inc, of Durham, NC (now part of Amersham plc, a unit of GE Healthcare). From 1991 to 1993, he served in President George H. W. Bush's administration as the director of energy research in the Department of Energy, where he oversaw a basic research budget of roughly $3 billion, and directed much of the federal funding for high energy and nuclear physics, materials science, magnetic confinement fusion, environmental science, the human genome project, and other areas. More recently, he chaired the National Academy of Sciences' Panel on Nuclear and Radiological Issues and the National Research Council's standing committee on improvised explosive devices. He has published over 200 peer-reviewed scientific papers. He is a fellow of the American Physical Society, and the American Association for the Advancement of Science, and he is a member of the American Academy of Arts and Sciences, the National Academy of Sciences, and the American Philosophical Society. He was awarded the Alfred P. Sloan fellowship in 1966, an Alexander von Humboldt award in 1976, the 1997 Broida Prize, and the 1999 Davisson-Germer Prize of the American Physical Society.

TheBestSchools.org  is hosting  hosted an  ongoing, in-depth, online debate between two leading figures in the argument over climate change. Prof. David Karoly and Mr. Glenn Tamblyn represent the “alarmist” side. Prof. Will Happer represents the “skeptical” side. Here are the links:
FCD Series introduction: The Most Rigorous Debate on Climate Change & Global Warming:

After the Major Statements, Dr. Karoly became discouraged and dropped out, so TheBestSchools.org ran a contest and solicited responses from climate alarmists, to find someone to replace Dr. Karoly in the conversation. They picked the most compelling response, by a Mr. Glenn Tamblyn, to represent the alarmist side of the argument.
Alarmist side: Detailed Response by Tamblyn (who replaced Karoly):

Skeptical side: Detailed Response by Happer:

(The conversation is not over. Final replies by Dr. Happer and Mr. Tamblyn are in the works.)
Alarmist side: Final Reply by Tamblyn:

Skeptical side: Final Reply by Happer: