Almost all climate activist bloggers heavily censor their blogs, to stifle dissent and control “the message,” because they find it too difficult to defend their views.

Example:
“And Then There's Physics” (ATTP), by Ken Rice & “Willard”

Here are some of my ATTP comments which Ken & Willard deleted:

I wrote, “Even in 1988 it was common knowledge that CO2 (the most important of the GHGs they discussed) has a logarithmically diminishing effect on temperature.”

ATTP replied, “I’m pretty sure that Hansen was well aware of this.”

I then quoted Hansen 1988 saying, “the assumed annual growth averages about 1.5% of current emissions, so the net greenhouse forcing increases exponentially,” and noted, “We all know that’s wrong.”

But izen proved me wrong, saying, “it is not false.”

So obviously not “all” of us know it. But I know it, and Ken knows it, and presumably even Hansen knows it, now.

Water vapor feedback doesn’t turn an asymptotically linear forcing into an exponential one. It just makes the linear slope steeper.

CFCs are another example of the many glaring errors in that paper. The Montreal Protocol was agreed upon in 1987, and the Vienna Convention in 1985, so there’s no excuse for Hansen 1988 (published August 1988) nevertheless projecting exponential increases in CFCs. That’s yet another way in which Hansen and his seven co-authors were wildly wrong about almost everything. 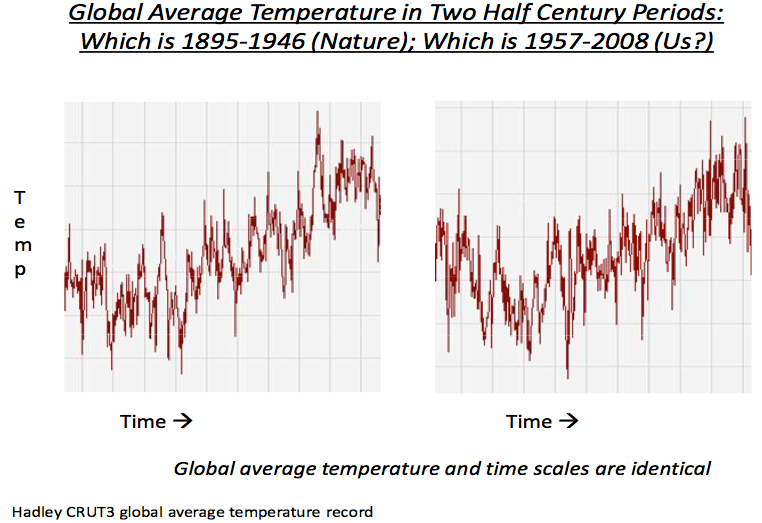 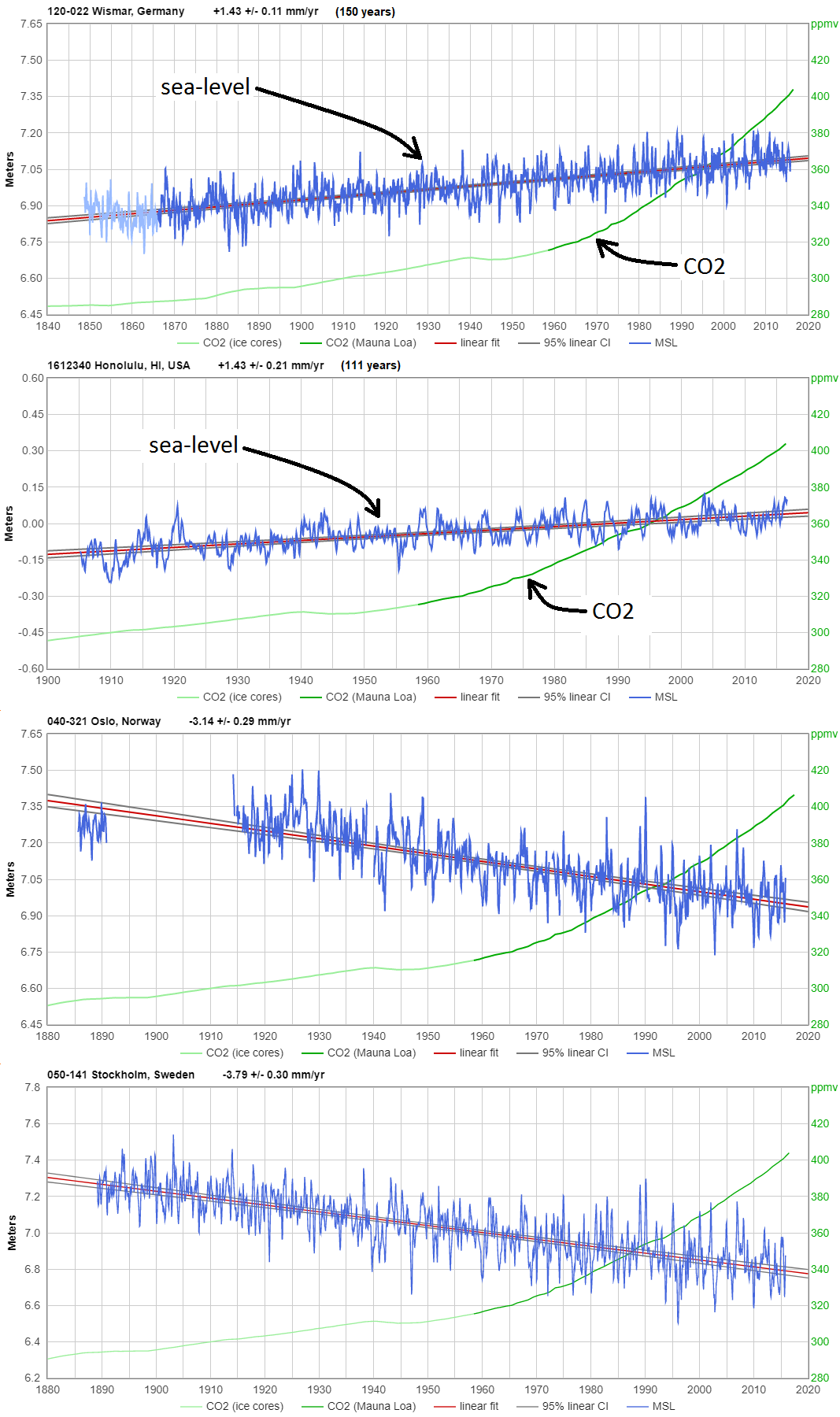 The last two graphs are from two sites which experience so much PGR that “sea-level rise” is negative, illustrating the fact that the global trend is so tiny that in many places it is insignificant, because it is dwarfed by common coastal processes, like vertical land motion, sedimentation, and erosion.

However, when I show climate alarmists graphs like those, they usually accuse me of cherry-picking. So here’s NOAA’s full 2016 list of 375 long term trend tide stations:

As you can see, none of the best-quality, long, sea-level measurement records show appreciable acceleration since the 1920s, or before.

izen continued, “…the egregious distortion of Hansen you attempt…”

I distorted nothing, and you surely know it. That sort of nastiness is destructive to scientific dialog. Please stop it.

Ken and Rachel, why did you delete my reply?

Really, Ken? Are you now deleting all my new comments, even my comment asking you why you deleted my comment?

Why are you doing this? Have I offended you somehow?

I linked to this ATTP discussion in the corresponding WUWT discussion, here:
https://wattsupwiththat.com/2018/06/28/why-the-climate-change-campaign-failed-scientists-demonstrate/#comment-2390138
In the spirit of reciprocity, this is the converse.

So-called “experts” have been crying “wolf” so long and loud about the fictitious “climate emergency” that many astute people, who’ve concluded that manmade climate change is actually modest and benign, have become dangerously accustomed to disregarding cries of “wolf!”

So when there’s a REAL catastrophe, and a different set of experts sound the alarm, some people wrongly assume it’s just another false alarm.

That’s a mistake which can have deadly consequences. In South Korea, one person, who they’re calling “Patient 31,” didn’t “believe in” the coronavirus emergency, and went on living her life as if she were not ill. Her irresponsibility has directly or indirectly caused the infection of about 2500 other people, so far.

Folks, this pandemic is not a false alarm. This is not another batch of superstitious paranoiacs, and scammers ginning up a fake “emergency” to pad their pockets. This one is real.

Be safe out there.

“Non-expert?” Are you calling the IPCC liars, Ken?

Dave_Geologist, all that was just to accuse me of “cherry-picking” the Honolulu sea-level measurement record? Really?

Examining the highest quality measurement data available, from the most nearly ideal measurement location (near the middle of the largest ocean), is not cherry-picking, it is science.

In fact, it is an example of the very “key to science.”

If you want to discuss Honolulu’s sea-level measurement record, that’s fine, but please tell us your estimate of its vertical land motion. (My estimate is zero ±0.5 mm/yr.)

daveburton says:
March 27, 2020 at 10:32 pm
dikranmarsupial wrote, “…only the trend is really relevant, so the noise makes it look like it takes up more than the scale than it actually does.”
Well, I don’t really agree that only the trend is relevant, and I don’t agree that what you call “noise” is irrelevant. The blue data are actual, measured data, not noise. In fact, they are already somewhat smoothed, because they are monthly MSL averages.
If you compare graphs of sea-level measurements for two nearby sites, you’ll find that the month-to-month variations are very similar. That should tell you that you’re looking at real water level changes, not “noise.”
In some cases, that makes it possible to deduce pretty good estimates of sea-level in the absence of local data. For instance, Miami Beach had a tide gauge with 47 yrs of data, but it was decommissioned in 1981. That’s unfortunate, because sea-level is a hot issue at Miami Beach.
However, that old 47-year record is still very useful, because we can compare it to the same period at Key West, and see that they were VERY similar, except that Miami Beach consistently recorded 1/2 mm/yr more subsidence than Key West.
So, even though we don’t have measurements for the last 39 years at Miami Beach, we can use the data from Key West’s exceptionally high quality measurement record, and add 1/2 mm/yr for the difference in rates of subsidence, to get a good quality estimate of the sea-level trend at Miami Beach. Neat, eh?
Some locations exhibit much greater month-to-month variations than do others, which is also interesting. However, I do have options to smooth the data, if you wish, with running boxcar or triangle filters. If the large month-to-month variations have caused my code to scale the vertical axis at more than 0.15 meter per division, you can use the smoothing options to remedy that.
In addition, I should point out that there’s not just one trend. NOAA only shows a linear regression on their graphs, but my site also calculates, and gives you the option of graphing, quadratic regressions, for detection of acceleration/deceleration. (At most locations it’s not much different from the linear trend, which is presumably why NOAA doesn’t bother with it.)
Also, in addition to the confidence intervals, for either the linear or quadratic trend (or both), I have options for displaying prediction intervals. Here’s a nice explanation of the difference between confidence intervals and prediction intervals, by Dr. Gerard Verschuuren:

Confidence Interval graph explained
There are other interesting things in the fine details of the sea-level measurements, too. For instance, some sites also show striking ENSO effects. During El Niño, the easterly Pacific trade winds diminish, causing the Pacific ocean to “slosh” to the east. You can see that in the eastern Pacific sea-level measurement records, as a strong correlation with ENSO. Conversely, in the western Pacific, sea-levels fall during El Niño (which can contribute to bleaching events on the GBR).
Here’s a graph which contrasts an ENSO index with sea-levels at San Diego, Calif. (eastern Pacific) and Kwajalein (western Pacific). Note that San Diego and Kwajalein look like mirror images of each other (except for the long-term trend):

dikranmarsupial wrote, “I have given you a fair recipe. Do you have any objections to it?”
Yes, I have a few.
1. I don’t want to obfuscate the differences in trends between different locations.
As I mentioned in my previous comment, if I were to scale all the graphs to take up the entire vertical axis, then in the thumbnails all the graphs showing positive sea-level rise would look pretty much the same, regardless of whether their trends are 0.1 mm/year or 10 mm/year.
Likewise, all the graphs showing negative sea-level rise would look the same, regardless of how fast it is.
2. I don’t want data to disappear above and below the graph area.
3. It would be an unnecessary departure from NOAA’s practice.
I’ve learned the hard way that some people are very hostile to my work, and quick to accuse me of bad faith. As long as I scale my graphs like NOAA does, I have a pretty good defense (“why are you complaining about my graphs, and not about NOAA’s?”).
If I thought NOAA’s practice was unreasonable then I would depart from it, and endure the heat. But I don’t. Their tide gauge analyses and graphs seem to me to be high quality work by competent oceanographers, and the choices they’ve made about how to scale their graphs seem reasonable.

Will you acknowledge that when you say, “Most of those who complain about censorship, or being silenced/cancelled, seem to be those who say things that deserve to be criticised and simply don’t want to engage with their critics,” you’re not talking about me? That it is not me who doesn’t want to engage, when you delete my comments on ATTP?