Methane (CH4) is the next-most important anthropogenic greenhouse gas (GHG), after carbon dioxide (CO2). With methane and carbon dioxide at current levels, It is calculated by both MODTRAN Tropical Atmosphere and the NCAR Radiation Code that a 0.1 ppmv increase in atmospheric methane level has about the same warming effect as a 4.5 ppmv increase in CO2 level. (Some other authorities estimate more or less than that 45:1 ratio, e.g., the IPCC's AR5 Table 8.A.1 estimates 26.5:1.)

However, even if you don't burn it, methane in the atmosphere oxidizes↑ fairly rapidly, changing ultimately into (negligible amounts of) harmless CO2 and water:

Various sources give the half-life of CH4 in the atmosphere as 6 to 8 years, which would make the average lifetime 1.4427 times that (because oxidation is an exponential process, rather than linear), yielding an average lifetime for a molecule of CH4 in the atmosphere of 8.7 to 11.5 years. Page 11 of this source gives the directly-calculated atmospheric lifetime of CH4 as ~8 years, but identifies a feedback mechanism that (they say) effectively increases the atmospheric lifetime of additional CH4 to ~12 years.

Call it 8-12 years. That's pretty short. It means the only reason CH4 levels are as high as they are (about 1.86 ppmv†) is that CH4 emissions are already high. There would have to be a very large,‡ sustained increase in CH4 emissions to cause much increase in long-term average atmospheric CH4 levels.

Methane levels have been monitored at Mauna Loa, Hawaii since 1983. During most of that time they've been inching up slightly, from about 1.65 ppmv to about 1.86 ppmv now. Here's a graph: 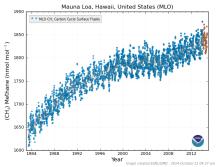 Ice core samples have extended the methane measurement record much further. Here's a smoothed graph of methane levels from 1840 to present:

†Methane levels vary slightly by location; this site has some maps.

‡How large is “very large?” Well, for comparison, it would take about 3 Gt of CH4 to increase the atmospheric methane level by 1 ppmv.