Postma nonsense: “There is no radiative greenhouse effect” (Burton notes)

I tried to watch one of those Joe Postma videos, the one entitled, "There is no Radiative Greenhouse Effect - Main Presentation." It's 70 minutes long on YouTube. I made it through 17½ minutes before I couldn't endure any more. 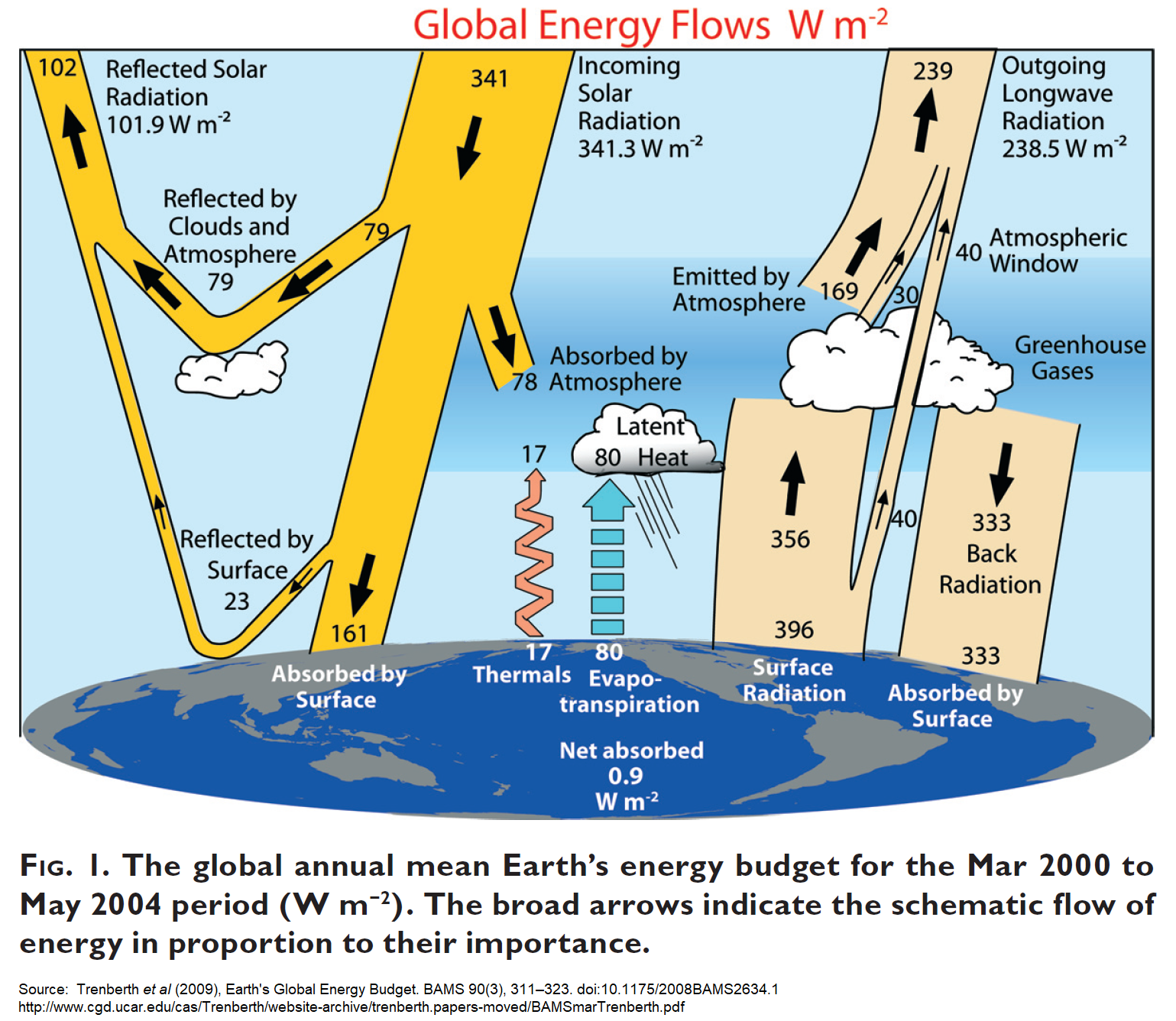 The diagrams he showed are very simplified.

2:00 "[these diagrams are] the consensus and the only derivation of where the greenhouse effect comes from."

Wrong. Those aren't "the derivation" of the so-called greenhouse effect. They are just simplified illustrations of it.

2:10 "There's one, basic, fundamental problem with this diagram... What's the problem? The Earth is flat."

It is not a problem that the Earth and atmosphere are shown as flat in some highly simplified illustrations, since the atmosphere is just a very thin layer relative to the diameter of the Earth. The Earth's diameter is nearly 8,000 miles. The height of the tropopause averages just 1/10 of 1% of that.

If the diagram represents ten miles of horizontal distance, then to correctly show the curvature, the center should be elevated by 4'2". That's 4.17/52,800 = 0.0079% above the horizontal.

If the scale is one mile to the inch (so that the horizontal line is ten inches long on your screen) then the true curvature would require the center of the 10" line to be raised by eight ten-thousand-th of an inch.

(And the more commonly seen Trenberth diagram does not show the Earth as flat; in fact, it greatly exaggerates the curvature of the Earth's surface -- which makes no difference at all, w/r/t the concepts involved.)

5:30 "One error is that Earth's effective temperature is being used as the solar imput."

No, it isn't. The solar input is measured, by satellites. It is between 1360 and 1370 W/m² if the Sun is directly overhead, and 1/4 of that averaged over the surface of the Earth.

Postma might be confused by the fact that the energy fluxes to and from the Earth are, on average, nearly identical. We know that fact because if they were not nearly identical then the Earth would be either heating or cooling rapidly.

6:08 "The solar input to the Earth does not occur over the same surface area as Earth's radiative output."

Can he really be so confused about his topic that he doesn't realize the figures in the diagrams are averages, over the entire Earth, including the dark side?

6:23 "By equating fluxes, you dilute the solar input over the entire surface area of the Earth."

That's total nonsense. He apparently thinks that calculating an average is equivalent to declaring that everything is at the average.

7:18 "[This derivation says that]... the greenhouse effect is responsible for melting ice, and for creating summer..."

Also complete nonsense. It says nothing of the kind.

That's gibberish. The solar constant is an irradiance flux, not a temperature, and there's no such thing as an "absorbed solar constant."

The numbers he made up are meaningless nonsense, too.

The two sources he's talking about are solar radiation, and LW IR back-radiation from radiatively active "greenhouse gases" in the atmosphere. The are not "at -18°C" or any other temperature. They are just radiation.

Radiation has energy density, and spectral characteristics, but it does not have temperature.

If you pour energy into something from two sources, it will heat faster than if you cut off one of the two sources. Of course.

10:50 (waves pointer at a box labeled "energy balance at the Earth's surface") and says: "this part here, basically what they're doing is adding two temperatures together and saying that this is going to create a new temperature."

Apparently he doesn't know the difference between energy and temperature. Unbelievable!

On the screen you can see that he has written, "Temperatures/fluxes never add in thermodynamics!" and he also says it at 12:00. Clearly, he thinks temperature and energy flux (power) are the same thing.

It astonishes me that he apparently managed to get two scientific degrees from the U. of Calgary, without learning such basic concepts.

12:12 "The only thing temperatures and fluxes do in thermodymanics is subtract, in which case you get heat."

And he obviously doesn't know what heat is.

16:41 "... 'if there are temperature differences, the heat energy flows from the hotter region to the colder region.' Alright, so this establishes that the cooler atmosphere cannot send any heat to the surface."

However, BOTH radiate (cooling in the process), and EACH absorbs radiation from the other (warming in the process). The reason the net flow of heat is from a cooler surface to a warmer atmosphere is simply that the transfer of energy from warmer to cooler is faster than the transfer of energy in the opposite direction, because warmer things radiates faster than cooler things.

17:21 "Radiant flux from the cooler atmosphere cannot transfer as heat to the warmer surface."

Absolute nonsense. (The word "as" seems to be spurious.) Radiation from the atmosphere absolutely is absorbed by the surface, warming it in the process.

All the 2nd Law requires is that the NET heat flow is from warmer surface to cooler air.

If you heat the air, it'll increase the rate at which the air radiates and heats the surface, thus reducing the NET rate of flow of heat from surface to air, thus making the surface warmer than it otherwise would have been.

And there I stopped. I hit the limit of the amount of ridiculous nonsense I'm willing to wade through in one day. I'm a patient man, but my patience is not limitless.